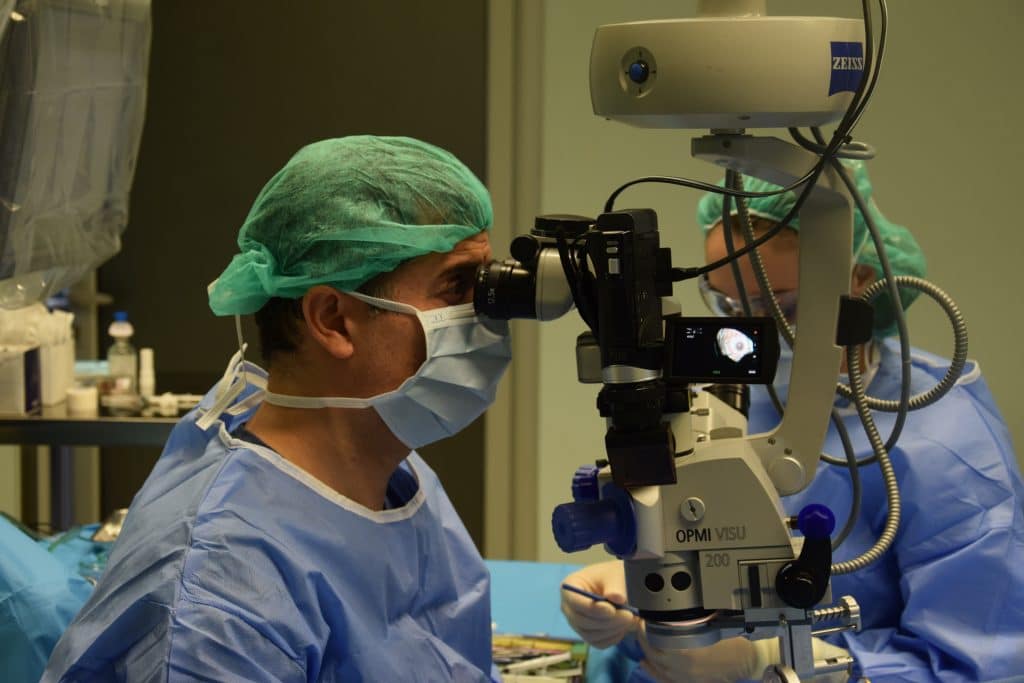 Various injuries and damage to the retina of the eye are now treated with a procedure known as vitrectomy. This procedure is completely safe and painless, and is also performed in diabetics.

One of the most complex interventions in ophthalmology is vitrectomy, which is performed on the posterior segment of the eye, through four small openings (less than 1 mm) of the sclera of the eye, through which it enters the vitreous and is removed, then replaced with special gas or silicon oil, and the holes are sealed with a laser.

Conditions in which this complex, but minimally invasive procedure, is performed range from diabetic retinopathy to retinal detachment and other eye injuries.

Diabetic retinopathy is damage to the retina (inner lining of the eye) as a result of diabetes. The retina receives the light that enters the eye and converts it into an electrical impulse, which is then transmitted through the optic nerve to the brain where the image is formed. Diabetic retinopathy causes damage to the small blood vessels in the retina and nerve cells, and this is resolved with vitrectomy – says Dr. Ilir Osmani, specialist ophthalmologist and surgeon at Sistina Ophthalmology.

Another condition treated with vitrectomy is retinal ablation, i.e. retinal detachment. It is the result of eye water penetration through a small hole in the retina, which gradually expands and lifts the surrounding retina. The aqueous humor passes through it and completely detaches the retina from the background of the eye. This is an emergency, which must be operated on within 24 hours, and the first symptoms are flashes of lightning and black spots in the field of view. Occasionally there is a small amount of blood in the vitreous. The condition worsens with the appearance of a curtain in the visual field. When the detachment reaches the center of vision, in one to two days the vision is significantly reduced and the person cannot read or recognize other people.

Also, eye injuries caused by a blow to the eye with a hard object, a tennis ball, a fist, etc., are treated with vitrectomy.

Hitting the eye with a hard object can damage the eyes, eyelids and eye muscles, and even the bones around the eye. If the eye injury is mild, the eyelids may become swollen and a bruise may appear. If the eye is not injured, the bruise goes away in a few days. If the injury is more severe, bleeding inside the eye may occur, as well as traumatic cataract. In some cases, there may be increased intraocular pressure and lead to visual impairment – says the doctor and emphasizes that during the operation the vitreous is removed, which is then replaced with normal eye water, which the eye produces independently and functions normally.

At the end of the operation, gas or silicone oil is placed in the eye to hold the retina until it is completely adhered. The advantage of gas is that it comes out of the eye by itself and after 2 to 6 weeks it is not necessary to go for additional extraction surgery. In cases where the ablation is not detected in time or is complicated, silicone oil is applied, which is then removed from the eye for several months (3-6 months), but sometimes it can stay for a long time.

The eye after surgery, which can be performed under local, sometimes complete anesthesia, is not red and sore, and recovery is rapid. It is necessary to apply drops and ointment therapy for two to three weeks, and the eye must be closed only for one day. Follow-up examinations are scheduled one day after surgery, seven days after surgery and 2 to 3 weeks after the intervention. After about 10 days with simple injuries, the patient can return to daily activities. During those 10 days, the patient needs to rest and lie down in a position recommended by the doctor, while working on a computer, watching TV, reading is allowed using the other eye.

The procedure can be repeated if the cornea peels off again or bleeds, and of course when the silicone oil needs to be removed. However, doctors suggest regular check-ups to detect various eye conditions and respond to their treatment to improve the condition before undergoing vitrectomy.

– If you go for regular check-ups, you can regularly monitor and determine any changes in the eye. It is especially important that the examination covers the dilation of the pupils, because that way you can see the back segment of the eye, which is, in fact, an indicator if there is a problem. The dilation of the pupils is done by putting drops in the eye, it does not last more than half an hour, it is not painful, there may only be a slight burning sensation, which is normal – says the interlocutor Dr. Osmani and adds that in diabetic retinopathy before switching to intervention there are less invasive treatments that are highly successful.

They include the application of injections and other therapies that, in addition to stabilizing the condition of the retina, also improve vision. Laser photocoagulation is used as an additional method. All of these treatments achieve the destruction of newly formed abnormal blood vessels as a result of diabetic retinopathy, which rupture and bleed, destroying retinal tissue and preventing healthy circulation.