“Let the path lead you to Sistina Ophthalmology” – Svetlana Bobevska 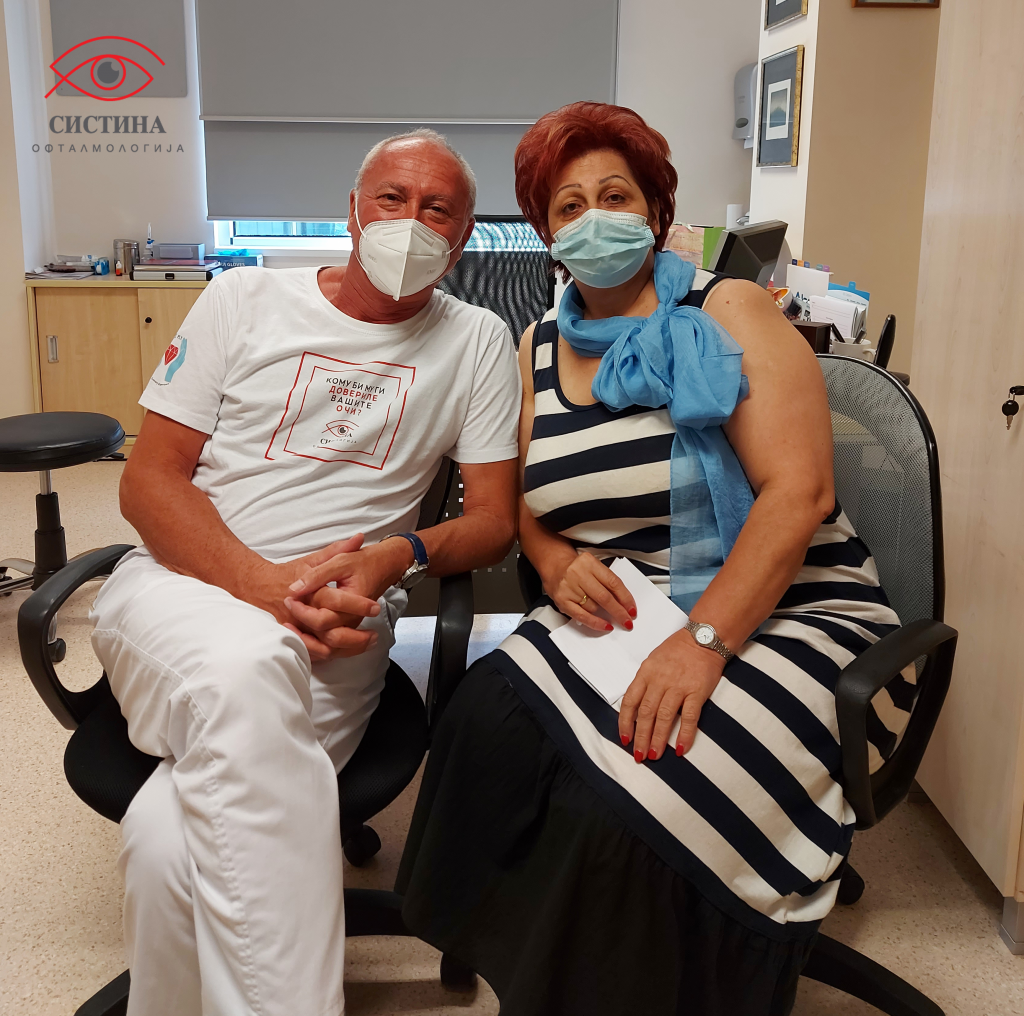 Read what Svetlana Bobevska from Veles wrote on our Facebook profile about her experience with us.

I am Svetlana Bobevska from Veles and I share my experience in Sistina Ophthalmology.

As a girl I started wearing glasses with a small minus diopter, but over the years the diopter increased. For a period of 30 years I wore the same diopter, I functioned normally and I successfully performed my work responsibilities as a teacher.

A year ago, my eyes began to burst with capillaries and tears, which interfered with my work as a teacher. I went for an examination in Veles, where they would give me drops and that was all, but the problem with watery and half-closed eyes was increasing. I was examined and a cataract was discovered and for a hospital I was recommended to Sistina Ophthalmology. I wrote an e-mail and they immediately answered that they would contact me by phone. Half an hour later my cell phone rang and I heard a kind and warm voice from the nurse who asked me what problem I had. I explained that this was my first time addressing them and that I wanted a detailed examination of my eyes. They scheduled an appointment with Dr. Zlatko and the next day I was already at Sistina Ophthalmology. From the entrance to the doctor’s reception I was fascinated by the warm attitude and the great reception. The doctor explained to me that they would do more examinations and tests. The younger doctor called me and took me to a room with a lot of computers. I felt like I was in a movie. In one place so many modern computers, expertise, ability and kindness of the staff, organization at the highest level. When the examinations were over, we went back to Dr. Zlatko who reviewed the results and warmly recommended eye surgery because both eyes were affected by cataracts. He explained to me how the operation would go, that it would be painless and that I would be awake the whole time of the operation. I immediately accepted and we agreed on the date.

On August 5, I was at Sistina Ophthalmology on an appointment for surgery. I was so anxious and scared because I didn’t know what I was going to do or would I see properly or ???

Another round of examinations, blood pressure check, blood count, drops, but the calm and comforting voice of the staff calmed me down. And finally I entered the operating room, and there I was greeted by Dr. Zlatko with his entire team. The doctor joked to calm me down how I was, would the job be successful, and I just said, “I leave my eyes to you and the whole team.” And the preparations for the operation began, through which the doctors and other medical personnel introduced me to what they were doing all the time. The doctor started operating with his impeccably coordinated team and miraculously I did not feel any pain, I just saw different types of light. When he finished with one eye, the doctor repeated the same procedure with the other eye. He explained to me that the operation was successfully completed on both eyes. When I got up from the operating table I could not believe that I was able to see after the operation and I went to the hospital room with my nurse. I laid on the bed and I could not believe I was like in a fairy tale. Five minutes later my husband came into the room and he was amazed that I was able to see normally. After a while, Dr. Zlatko came and gave me directions for therapy and told me that I could go home. Just amazingly, half an hour after cataract surgery by removing my damaged lenses and implanting new replacement lenses that completely replace natural lenses, I could go home. We said our goodbyes until the next meeting of the first control after a week. And I left the hospital. I received the therapy exactly according to the given scheme and I had a great improvement. I express my gratitude to Dr. Zlatko and his team, all the staff who made sure that I function flawlessly today without glasses. Now I am another person full of life and self-confidence.